“The King’s Speech’, an Academy Award winner historically based, can be reviewed through the lens of Adlerian Psychology. As mental health practitioners, we adopt a modality, a theory, a general road map, for our treatment of clients. I am an Adlerian, but not exclusively. Using one approach limits the effectiveness of the therapy. Rogers and Freud are among the modalities from which I glean now and again.

In this film, Lionel (who was not a real doctor) exhibits an Adlerian approach in order to align with his client, none other than the King of England. From cognitive strategies, he treats George, his symptom, stuttering. First and foremost however, therapeutic alliance is the foundation and prerequisite for effective outcome. Therefore, the therapist’s Adlerian approach and application sets the stage on which the King will be treated.

King George VI, or Bertie as he is nicknamed as a child, was a product of his Royal Family, a rather confining one. An autocratic father, a disengaged mother, and an older brother. The latter is portrayed as a tormentor to Bertie, a rebel of unorthodox lifestyle. George contrasts Edward, as is typical of 2nd born child, being the responsible introverted son, forced to become King. Resentment and loyalty wrestle within the new King. His thin skin, brought on by years of teasing and critical fathering, have left him with low self-confidence.

Organ inferiority. (Mosak, H. & Maniacci, Michael. Adlerian Psychology: The Analytic, Behavioral, Cognitive Psychology of Alfred Adler. Taylor Francis, Philadelphia PA. 1999.pp.34-35.) Theorized by Adler, addresses the physiological predisposition one inherits. He himself, a sickly child, was considered a cripple, and as such socially inept. From this organ inferiority, sprouts the development of personality. The mix of nature/nurture creates the finished product. However as contrary to Freud’s determinism, Adler postulated a soft-determinism,(Manaster, G. R. Corsini. Individual Psychology. Adler School of Psychology. Chicago Il. 1982, p. 65-67.) that is, the possibility of editing the basic weakness. As the shock is precipitated in one’s adult life, the opportunity for editing becomes apparent. The creed adopted as a child, needs to be changed to meet the present circumstances. George conquers his sense of inferiority to Edward, manages his stuttering, and lets go of his father’s tyrannical parenting. Around age 4, George began to stammer, a result of anxiety and a coping mechanism brought on by the pressure set upon him. The more he is teased, the more he delves deeply in his escape, that is, stuttering. As an adult, through behavioural and cognitive practices, the King commands his speech, sans stuttering.

An Adlerian therapeutic alliance is grounded in democracy. The two experts, the client in his narrative and the therapist in his knowledge and practice, align to discover and to deal with the issues. There is no pecking order. During sessions, Lionel, manifests as an equal to the King of England, this being controversial to say the least. However, through this egalitarian stance, George ceases to evaluate himself as a failing King, but a comrade at war against stammering. “You may call me Lionel” he says, expecting, “you may call me George”. From the light hearted humour of building a model airplane, to owing a penny, it is on equal footing the Lionel meets with the King. The disappearances of echelons, provides an equilibrium producing responsibility for each player, each in his own expertise.

The climax of the movie precipitated by the therapist confronting the King, while sitting in his throne no less, peaks with: “I have a voice!” At this point, George has aligned his self-ideal and his self-concept, taken his ownership of life tasks, triumphed over stuttering. Complexes of inferiority and superiority are positioned appropriately, not in a reactionary way, but in a responsive, logical and grounded fashion. Lionel offers encouragement, lives encouragement for George. The power of encouragement is understated too often. (Mosak and Maniacci p.l & 146.) The client manifest of his own power, his recovery. It is not the result of the therapist’s work. The latter offers, it is up to the client to work through it if he chooses. Advice giving, convincing, or badgering the client on the contrary blocks a healthy encouragement in which the client self-determines.

Note: Louise Giroux is an associate in the practice of Dalton Associates. 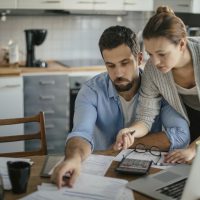 Time and Money Worries Give Way to Holiday Stress

The APA and OPA offer 5 practical ideas to reduce stress during the holiday season.

Louise Giroux practices counselling and therapy in Sudbury under the supervision of a Registered member of the College of Psychologists of Ontario.